Home Lifestyle Chilling out with authentic sushi at The Beach House
Lifestyle
June 9, 2022

Chilling out with authentic sushi at The Beach House

BORROWDALE Park Racecourse, founded by the Mashonaland Turf Club in 1892, has been the home of thoroughbred horse racing, once considered to be the sport of kings, for over a hundred years. In addition to horse race meetings, Borrowdale race course has now become a trendy shopping centre, with outlets for wine, fine foods, antique furniture, clothing and interior design.
It is also home to the Beach House, a funky restaurant popular with generation Zers, youngsters who grew up with the internet, social media and cell phones.
Marketed as a place to sip pina coladas, ‘enjoy the beach vibe’ and ‘dance the night away’ with Harare’s favourite DJs and the soulful sounds of @divinemahara, a chilly mid-winter visit to the Beach House on a Sunday afternoon might have been ill-advised. 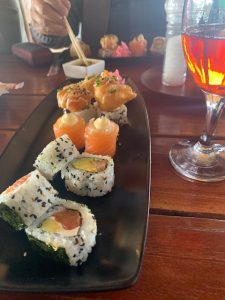 Authentic sushi at The Beach House

But in addition to the excitement of visiting a restaurant for the first time, the lure of enjoying a platter of authentic sushi created by Oh So Sushi, now operating from the Beach House in addition to Queen of Hearts, proved irresistible.

Unless you know where you’re going, Borrowdale Race Course is a veritable rabbit warren, with signs pointing hither and thither, and roads leading to nowhere. 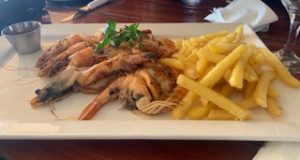 Following vague directions from management that the Beach House was ‘in the middle of the race course’, we eventually followed a long and winding road that led across a wide open space resembling the ‘blasted heath’ where Macbeth met up with the three witches.

On arrival, we checked out signs warning guests to beware of cell phone thieves, before being greeted by a friendly maitre d’, who directed us to a table for five, reserved in advance.

During the winter months, the Beach House Restaurant probably ranks high for having the coldest dining area and the most uncomfortable furniture.
Dining at a picnic table placed on top of imported beach sand beneath a minimal canvas awning doesn’t appeal to the average Baby Boomer (born between 1946 and 1964), although this is probably part of the adventure for most Generation Zers.

Having said that, the Beach House also ranks high for serving the very best sushi.
We all wanted to eat sushi, and ordered individual platters with 10 pieces each, based on the popular Red Plate that consists of salmon crunch, prawn California, roses, rock shrimp tempura and Philadelphia sushi.

Each piece of sushi was a delicious revelation, made with skill and using many elements including authentic Japanese short grain rice, the freshest salmon, prawns and avocado, and a light sprinkling of black sesame seeds.

The perfect foil for the sushi was the bottle of Graham Beck Brut sparkling wine we brought with us (corkage $10, champagne glasses supplied).
The menu also includes a wide variety of charcoal grilled chicken, beef and seafood dishes. The platter of queen prawns grilled in garlic butter that we shared was well-prepared and seasoned, if slightly cold by the time it arrived at the table. The chips, however, were golden, crisp and freshly fried.

There was a long wait between courses, and although our waiter did his best, the demands made upon him by a large group of youngsters kept him occupied. We had planned to stay for coffee, but eventually gave up the wait, and decamped to Cafe Nush in Borrowdale for a macchiato and a slice of baklava.

While the Beach House is currently a favourite destination (especially on a Friday evening) for younger generations, we were not the only middle-aged fogeys having lunch on the beach last Sunday. But unless you’re impervious to winter chills, time your visit for the warmer months.