Fingaz, OM-backed TCS on next week

ZIMBABWE’S leading business and financial paper, The Financial Gazette in partnership with Old Mutual (OM), will host this year’s edition of the prestigious Top Companies Survey (TCS) awards next Thursday at The Venue in Avondale, Harare.

This year’s awards are being held under the theme: Innovating for Growth in a Volatile, Uncertain, Complex, and Ambiguous (VUCA) environment.

The initiative, which honours the top-performing companies on the Zimbabwe Stock Exchange (ZSE), will be broadcast from 18:30hrs on all The Financial Gazette, Daily News, 3Ktv, and OM social media platforms.

Since its launch, the survey has proved invaluable in promoting transparency, good corporate governance, ethical conduct, and corporate social responsibility as well as providing a platform for networking among corporate leaders and other invited guests. 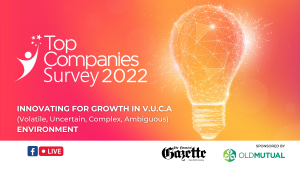 The pink paper’s general manager sales and marketing, Edwin Vengesa, said preparations for the premium event were at an advanced stage.
“Ever since Covid-19 hit Zimbabwe’s shores two years ago, the Top Companies Survey was being held virtually, but this year, we will hold a hybrid event.

“The pandemic greatly accelerated the adoption of digital technologies, and companies with a digital edge pulled further ahead. This year’s event honours and celebrates innovation in a VUCA environment,” he said.

“Again, this year, the model was put to the test, and it showed its resilience, robustness and functionality.
“Continuous improvement is our key mantra, and this year it saw us improving all our quantitative models to ensure comprehensive capture of essential elements affecting our companies.

“This largely involved the incorporation of additional ratios to capture solid performance when working with numbers achieved in a highly inflationary environment,” Musa said.

Launched in 1980, the Top Companies Survey ran for 28 years before its temporary suspension in 2008, due to an economic crisis, which started in 2000 and worsened in 2008.

The year 2014 saw its relaunch, in partnership with OM, the country’s largest investor on the ZSE.
The judges and analysts, independent of both The Financial Gazette and Old Mutual, come up with the judging criteria and categories for the awards. newsdesk@fingaz.co.zw