Home Lifestyle Getting in the Groove on Africa Day at Pamugoti Restaurant.
Lifestyle
June 2, 2022

Getting in the Groove on Africa Day at Pamugoti Restaurant.

AFRICA is the birth place of humankind, and all of humanity shares an African heritage. Also the country of the future, Africa has the potential to become the world’s next super power. A vast continent with diverse cultures, the African Union’s goal is to create a united Africa, with an effective pan-African world view. 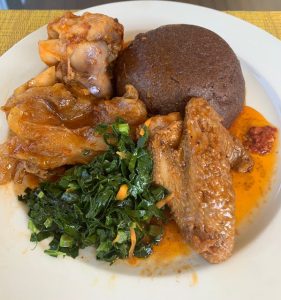 In Zimbabwe, Africa Day last week was a day to celebrate, to put African art up on the walls, and groove to the rhythms of Nigerian Afropop star @burnaboy and iconic musician @jahprayzah. Whether a full English breakfast was on the menu, or you warmed up the previous night’s sadza and fish, an hour or so was needed to delve into Together, a volume of short stories and poems by notable Zimbabwean writers, Julius Chingono and John Eppel. Cultural considerations aside, priority should be given to getting glammed-up for a traditional meal at one of Harare’s many restaurants.

Deciding where to eat out can be as important as making life choices – both require careful consideration. Whether you’re impecunious or simply watching your pennies, $50 for a three course meal on Africa Day is a big ask. A number of restaurants, some in attractive surroundings with comfortable seating, offered traditional fare ranging in price from $25 to $15.

The Restaurants Association of Zimbabwe posted a listing on social media of a number of restaurants open for business on Africa Day. They ranged from 5 star to family dining establishments, from ethnic restaurants, such as Chang Thai on Churchill Avenue, to The Village Greek in Sam Levy’s Village. Pamugoti Restaurant, on Ridgeway South advertised a taste of Zimbabwe with an Africa Day buffet lunch, and live entertainment with the Marimba Boys, priced at $20 per person.

Pamugoti, with its green lawns, trees and pleasant surroundings, seemed a good choice. As a buffet was advertised, we could sample a number of traditional favourites, and with luck could come back for second helpings. In addition, Pamugoti being close to my house, the chances of dealing with aggressive drivers and badly-behaved traffic were much reduced.

On arrival, we discovered that Pamugoti, closed since the Covid shutdown, had transferred the action to its nearby sister restaurant, The Mustard Seed. Our courteous waiter Albert seated us comfortably on the verandah in the warm winter sunshine. There were only a couple of other patrons, but as the afternoon wore on, more diners arrived. Albert explained that the spiralling cost of living meant that fewer people were able to eat out.

The buffet never materialised, and Albert explained that as very few bookings had been received for the event, diners could simply request the dishes they required, and the meal would be plated up in the kitchen. Choices could be made from mazondo, aka knuckle bones, road runner chicken stew, goat stew, and beef stew. These would be served with beans, covo, and either white sadza or sadza re zviyo, a nutritious dish rich in fibre, proteins and calcium, made from finger millet.

Bony and gelatin-rich mazondo are a Zimbabwean delicacy, best eaten at home, where you can roll up your sleeves and enjoy every morsel, but difficult to resist when they are cooked with skill, and feature on the menu at a restaurant. Sometimes praised as an aphrodisiac or a cure for hangovers, mazondo stew is the ultimate comfort food, with the richness and depth that comes with bone marrow and slow cooking. Needless to say, the chef at Pamugoti nailed it with all the traditional dishes.

Asking for details of this talented cook, I was told that she is a lady, but her identity remains clothed in mystery. If I discover that she’s a permanent feature at Pamugoti, I’ll be buying meal tickets and eating there every week.

Back home, the afternoon was spent admiring the highly-collectible landscape paintings of Zimbabwean artist Richard Witikani, and the multi-layered, textured paintings of Zambian artist and educator, Patrick Mumba.

On Africa Day, consider how every new year brings renewed talent in every field to the African continent. It’s only a matter of time before the continent is recognised as the super power it is destined to be.   A Matter of Taste  Charlotte Malakoff