THE African Export-Import Bank (Afreximbank) says it will disburse US$40 billion towards intra-continental trade and investments for the next five years building on providing confirmation lines and correspondent banking services to African banks.

This follows after the pan-African multilateral trade finance institution has disbursed US$20 million in five years through intra-African trade division.

This was said by Benedict Oramah, president and chairman of the board of directors of Afreximbank at the start of the 29th Afreximbank Annual Meetings (AAM2022) in Cairo. 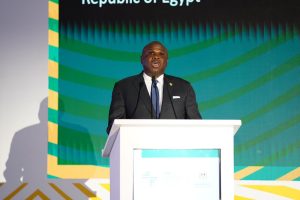 Benedict Oramah, president and chairman of the board of directors of Afreximbank

He said the pan-African multilateral trade finance institution has raised the intra-African trade share of the bank’s portfolio from three percent in 2016 to about 27 percent in 2021.

“We are providing trade confirmation lines and correspondent banking services to African banks to support intra- and extra-African trade. So far, the Bank has onboarded nearly 500 African banks and opened credit lines for 170 in 38 countries. An amount of US$3,9 billion in limits has been created,” Oramah said in an opening statement at the AAM2020 held at St. Regis Alamsa Convention Centre in Egypt’s New Administration Capital.

“Today, Afreximbank boasts of the largest network of connected African banks to ensure that no country is deprived of trade services. And as international banks continue to withdraw from the continent, Afreximbank is developing a strategy to support strong African banks to fill the void, so that African financial markets can be in the hands of Africans.”

He said Afreximbank is a firm believer that we can only begin to resolve these questions through aggressive pursuit of intra-African trade promotion and implementation of the African Continental Free Trade Agreement (AfCFTA).

Giving an update on some of the trade bloc and continental integration initiatives, Oramah said the pilot phase had been completed and launched the commercial operations of the Pan-African Payment and Settlement System (PAPSS).

“Eight African central banks and over 45 commercial banks have joined the system that will enable the payment for intra-African trade in African currencies, thereby domesticating all intra-African trade payments and potentially saving the continent over US$5 billion in transfer charges,” he said.

“A major positive impact will be a potential reduction in external debt incurred by African economies as they invest in infrastructure. With PAPSS, the Ugandan government can pay an Egyptian contractor in Ugandan Shilling while the Egyptian Contractor will receive Egyptian Pounds.”

He noted that progress had been made regarding introducing a Collaborative Transit Guarantee Scheme.

“The Bank has now been admitted as a Regional Transit Guarantor in the COMESA region and expects to soon expand coverage over the entire continent. We can now be reasonably confident that when the Cape-to-Cairo Road championed by the Egyptian government and well advanced in construction, is completed, one Regional Transit Bond will suffice for a truck, with goods, to travel from Cairo to Cape Town and vice versa. Afreximbank has committedUS$1 billion in support of the Scheme,” Oramah said.

He said Afreximbank and the AfCFTA secretariat have made significant progress towards implementing the Digital AfCFTA project called the African Trade Gateway.

He complimented the resilience of the continent during the challenging times brought about by the Covid-19 pandemic, adding that positive stories emanating from particular countries like Egypt, which had invested over US$62 billion over the past six years in massive infrastructural transformation, were a manifestation of the continent’s ability to achieve whatever it desired for its people.

“Notwithstanding the increased frequency of crises, we must not lose sight of the fundamental challenges that Africa must resolve. We can no longer accept that after 60 years of independence, Africa remains financially and economically fragmented. We can no longer continue to espouse the benefits of an integrated continent but do little to achieve it,” Oramah said.

On the ongoing Ukraine crisis, he appreciated the new challenges posed to Africa, including difficulties in accessing grains, fertilisers and petroleum products, and noted that Afreximbank had stepped in with the US$4 billion Ukraine Crisis Adjustment Trade Finance Programme for Africa to help countries to contain the short-term impacts of the crisis.

He appealed for increased commitment to the Bank by its shareholders, saying that a stronger Afreximbank could be one of the solid pillars on which Africa’s development could be built.