Print
EMail
Own Correspondent
WHO doesn’t love fine food? In spite of a cost of living crisis and a galloping rate of inflation exacerbated by the war in Ukraine, new restaurants and fancy food outlets  continue to open up.
While flavourful  white truffles and Beluga caviar remain rare items on the shelves of gourmet food shops in Harare, it’s possible to find speciality food stores stocking luxurious and indulgent items to raise the bar when preparing a feast. Take, for instance, Harry’s Fine Food Store, that opened recently at the Borrowdale Race Course. 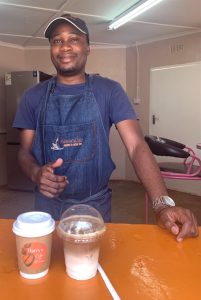 Should you think that Borrowdale Race Course, founded in 1892 by the Mashonaland Turf Club, is exclusively the home of thoroughbred horse racing, a visit to the race course will reveal a rabbit warren of high-end shops, converted from offices behind the spectators’ grandstand. There was a constant stream of shoppers visiting Harry’s, and the occasional indoor traffic jam as trolleys laden with fancy goods navigated the narrow aisles.
If your cup of tea is Five Roses Ceylon Blend, jasmine scented green tea, rose petal and vanilla tea, or a host of other exotic creations packaged by Woolworths, head for Harry’s. Specialist breakfast cereals such as ‘chocolatey paw shaped’ Coco Pops and ‘vanilla flavoured oatmeal bits with fibre and probiotics’ recommended by Leddy the Llama, will satisfy the most demanding toddler.
Creative cooks weary of using refined and processed cooking oils lacking in flavour and nutrients, will find an array of exotic speciality oils on the shelves at Harry’s. Apart from extra virgin olive oil, considered the gold standard for cooking oils everywhere, there are bottles of organic coconut oil, almond oil, peanut oil, chilli oil and avocado oil. Apart from health benefits, avocado oil is versatile, its high smoke point making it perfect for grilling, baking, searing and basting. Given the number of avocado farmers in Zimbabwe, it should be a matter of time before supermarket shelves everywhere are groaning with locally produced bottles of avocado oil.
A few metres away from the entrance to the store, in the shade of a flowering Jacaranda tree, is Harry’s Coffee Shop, a cute hexagonal building with orange shutters. Still a work in progress, workers were creating a shady paved area, where thirsty shoppers will be able to relax. Besides Americanos, caffe lattes and cappuccinos, the menu includes smoothies and milkshakes. Iced coffee, served with ice cubes and a straw, was delicious. Prince, the barista, explained that the coffee, made from the finest coffee beans from East Africa and Indonesia, was blended for Pioneer61, a faith-based start-up coffee company based in Tete, Mozambique. Based on the teaching of the prophet Isaiah  in chapter 61 to ‘bring good news to the poor’, profits from Pioneer61 go towards rescuing and educating orphans and widows.
Having visited Harry’s Coffee Shop, maximise your caffeine hit by clambering up the outside staircase leading to Inner Living, a locally based interior and exterior design firm. Owner Tracey Ash-win will help you re-vamp your home decor, with expert advice on curtaining, upholstery, furniture, rugs and blinds.
Punters of yesteryear make recognise the spacious Inner Living premises as the former tote station, accessed from the stands by a lift (now defunct). Tote betting differs from betting with a bookmaker, and can be the most rewarding place to back your instinct on a winning horse.
In addition to horse racing, Borrowdale Race Course is now home to an intriguing array of shops and restaurants, but one hundred and thirty one years ago, it was part of a vast tract of farm land where vegetables were planted and watered from a man-made dam. The farm was partly owned by business man Henry Borrow (Harry to his family and friends), who also had interests in mining, transport and trading. Eventually the land was divided up into residential stands and commercial plots. Named after Henry Borrow, it came to be known as the suburb of Borrowdale.
Harry’s Fine Food Store is said to be named after a family member who is passionate about good food. Apart from sharing the same name, there is little to connect Harry Borrow with the gourmet inspiration behind Harry’s Fine Food Store. But there’s little doubt that Henry Borrow would have been impressed with the store’s well-stocked shelves, had he glimpsed the future.
A Matter of Taste Charlotte Malakoff
Comments to: cmalakoff@gmail.com